The essay incorporates the various sources of greenhouse effect and static government measurement to reduce the same in Australia. The MLA has been taking initiative to reduce carbon emissions from ruminants who are though major source of food production in Australia. They contribute around 6 billion tons of greenhouses gases each year in Australia. The waste generated by ruminants produces methane and nitrous oxide which are the largest contributors for warming earth's surface. The essay will provide an overview about the livestock and its contribution towards greenhouse effect and efficiency of Australian market. It will incorporate policies and procedures to reduce gas emissions from livestock.

Australian livestock digestion contributes generously to greenhouse gas emissions. As Australia is amongst the second in exporting of wool and red meat they need to maintain livestock by feeding extensively providing tropical grasses and woodlands which are in abundance (Smith and et.al., 2018). It has been estimated that livestock production is growing at a faster speed than agriculture thus producing more and more greenhouse gas. Methane and nitrous oxide is produced from livestock digestion system and has reached 50% of overall emissions in Australia.

It has been researched that total 80 Mt of methane is produced globally from ruminants both wild and domestic (Frappart and et.al., 2018). Both methane and nitrous oxide represents a loss of energy and decrease of nitrogen capture for plant growth. CH4 or methane contributes to 11% of national greenhouse gas emissions in Australia which comes from beef, dairy cattle and sheep. The methane is produces in the rumen of these animals which is the first stomach of ruminants and helps in fermentation (Sankar and et.al.2018). Methane plays a critical role in removing the hydrogen produced in microbial fermentation in the large fore-stomach (rumen) of these animals, allowing efficient digestion, growth and performance. MLA has been involved in reducing methane emission using government programs such as Carbon Farming Futures and RELR program.

The above table depicts various category of livestock and emission of Methane gas from their digestion process in Australia in the year 2008 (Frappart and et.al., 2018).

It is estimated that the global production of meat and dairy products will increase by the end of 2020 enhancing consumption capacity of people in developing countries. The Australian livestock industry have a huge potential to enhance its operations so as to make profits but needs to take a strict control over controlling of harmful gases in the environment. The Australian government needs to take sustainable and environment production of meat and dairy products to decrease the essence of greenhouse effect (Sankar and et.al., 2018).

Australia has been amongst the highest producer of methane emission all over the globe. Thus it requires to form strategies in order to reduce carbon footprint so as to reduce methane and other harmful gas emission (Sergeev Sablon and Little, 2018). The graph depicts the increasing rate of emission with the changing years has increased in Australia as compared to other parts of the world. Australia has generated huge tonnes of red meat for all parts of the globe and thus contributed generously in the emission of harmful gases by the ruminants and their digestive process.

The use of red meat and cattle products in Australia has seen a major change in last few years which impact its overall equilibrium market efficiency. The cost-benefit analysis of Australian market weighs the consequences of carbon emissions and the cost related to stabilize its impact on the country. Policy needs to be formulated in order to bring benefits which are equal to the cost of damages that is avoided (Sankar and et.al., 2018). Thus, an analysis of the effect of greenhouse gas emissions from livestock digestions on the economic efficient equilibrium of the market is carried out using Cost-Benefit model of economics. This model of economics will bring in equilibrium in the Australian market thereby imposing taxes on producers.

The Benefit cost analysis takes into two variables that is emission levels and social cost of carbon. The benefit is calculated on the basis of an equation which comprises of E1 and E2.

Where, E1 stands for annual harmful gas emission in the era of no carbon tax

The table depicts various range of emissions in Australia during the period of no methane tax which was later levied in the year 2012-2013. This year has seen a lower emission of greenhouse gas as government has imposed taxes on harmful gases emissions by corporate sectors, agriculture and livestock farming. The below graph clearly shows the decrease in carbon footprint by Australia due to carbon taxes (Sergeev, Sablon and Little, 2018). 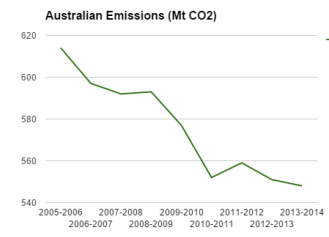 The another factor responsible for calculating cost benefit analysis is social cost of carbon. This factor converts the emissions into a monetary value (Smith and et.al., 2018). Let us suppose the SCC for four years to be

Now to calculate the economic analysis in order to determine the benefits of carbon tax period. The E1-E2 as calculated be the year 2011-2012 has seen an emission of 559 with no methane tax and year 2013-2014 has seen harmful emission of 548 with methane tax on livestock producers which has a difference of 11 Mt of methane emission. Thus the benefits arises in the form of lower methane emission has impacted the equilibrium market of Australia.

An analysis needs to carry out to reduce carbon footprint by involving various strategies which will incorporate imposing taxes on livestock producers, bring in innovative technology and new production methods and lastly enhance consumption of artificial meat (Oreskes, 2018). All such changes incorporated by MLA has to be given a proper channel and ways to implement. The strategies will include

Herd management - To reduce methane emission the producers of livestock needs to manage animals by reducing unproductive and enhancing productive breeds. They should focus on health diet of animals and quality of food which will improve their rate of fertility and thus, reduce total rate of methane (Oreskes, 2018).

Managing diet and nutrition provided to animals - The quality of feed provide to livestock will help in quick digestion thereby controlling rate of methane emission which is usually produced by ruminants while digesting hard food. Another important aspect needs to be kept in mind is to improve the quality of forage provided to ruminants which should have high quantity of soluble carbohydrates and low fibre.

Animal breeding - Another strategy is animal breeding which should be incorporated in order to reduce emission of methane during livestock digestion. It is viral to select those genetic lines of cattle and sheep which has lower methane emissions. It depends on the grazing system of animals which should be checked and controlled by livestock management team.

Rumen manipulation - It implies to chemically reducing the microbial bacteria present in rumen of ruminants so as to reduce methane emission during digestion process. The research shows many reforms and new methods of implementing this system has gained importance in coming years. Many types of vaccines and other agents needs to be used by the producers of livestock so as to minimize the emission of harmful gases such as methane and nitrous oxide which impacts earth.

Another strategy which is incorporated by the MLA is the use of artificial meat or IVM so as to stop he emission of methane from beef cattle (Oreskes, 2018). A survey though conducted shows a clear willingness of people to introduce IVM as red meat is harmful for humans as well as for the planet Earth. Research are undertaken to make people aware about the harmful of red meat and various diseases associated with it.

The essay concludes the harmful effects of carbon, methane and nitrous oxide produced during managing livestock and other associated activities which is the main reason behind increasing greenhouse gas effect which in turn is warming the earth surface bringing in newer diseases. The economic equilibrium of Australia is impacted by the emerging emission of harmful gases through the livestock management and their digestion system. There are strategies which are formulated to reduce greenhouse gas effect from livestock production system. The Australian government needs to impose taxes on methane emission which will impact producers of livestock to react in a more environment friendly manner by using efficient ways to feed and mange