Success of any organization depends on the collaborative efforts of the staffs (employees) and management regardless of any sector. Talent management and performance management system (PMS) are the two mechanisms through which hiring, training and retention of the efficient employees can be ensured following a two-way method (feedback collection and review) ensuring contribution towards organization meeting desired goals (Al Ariss et al. 2014). The current report aims to deal the performance management issues took place in Steel Co, a small manufacturing firm being the business adviser. In case of manufacturing company, PMS plays significant role in ensuring productivity and quality of the products. Main issues raised in the case study depict lack of efficiency among employees (due to lack of training), poor profit margin, pay freeze (due to lack of desirable performance), autocracy and de-motivation among the employees. While dealing with the issues from divergent aspects, efforts will be made to propose a new PMS along with proper implementation strategy through the report.

1. Evaluation of the PMS to introduce new a new system

It is not worthy to mention from the referred case study that throughout the years, the owner-manager has possessed an autocratic approach resulting in poor communication raising dissatisfaction among the employees (Dries, 2013). Notably, most of the employees were semi-skilled or unskilled resulting in poor financial performance of the firm. However, after the appointment of the divisional manager efforts have been made to enhance the performance of the employees ensuring productivity and quality. PMS has been devised as a tool aiming towards better performance and enhanced communication. The divisional manager however maintained a participative approach initiating number of activities as follows as the part of performance management system.

The efforts taken by the divisional director may be praiseworthy than the approach maintained by owner-manager. However, the implemented PMS in Steel Co can be criticized from different aspects as it resulted in vain even after the evaluation after almost one year. There were some issues involved in the PMS those are listed below.

Listed aforementioned issues elucidate that there were certain loopholes in the PMS. In order to enhance the performance of the employees, there is a need of introducing a new system so that the firm performs well in the competitive environment. Van Dooren (2015) noted that PMS is the collaborative efforts of planning, monitoring and reviewing performance of the employees based upon the desired goals. This is not an annual performance review but a continuous process. Feedback collection is one of the key aspects of PMS so that gaps could be identified and mitigated. The new PMS would contain the following elements:

Most importantly, it would be fair and consistent not like the previous one in Steel Co. in addition to that, it would ensure maximum performance along with continuous employee development. As being a manufacturing firm, the responsibilities of the employees and the managers are listed below:

Diagrammatic representation of the proposed PMS is illustrated below: 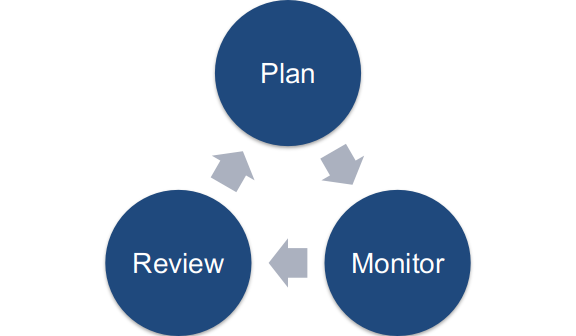 Plan: the very first stage requires collaboration of employees and the management of Steel Co. some of the activities such as job description and responsibility would be determined. The work plan would also be designed and objectives (SMART) would be determined that would guide the employees towards better performance resulting in increased productivity of the firm. Initially, it could be seen that no draft of plan has been made to keep the employees on the track (Pulakos et al. 2015).

Monitor: Performance of the employees need continuous monitoring that was widely missing in the previous mechanism implemented by divisional manager. Regular meeting with the employees would be required here. Shared feedback would also be preferable so that performance could be monitored in more enhanced manner.

Review: review would be the final stage of the proposed PMS where performance of the employees would be evaluated. Main aim would be to identify the gaps and develop strategy to mitigate those.

The proposed mechanism as illustrated above would help in mitigating the shortcomings and Steel Co would be able to ensure high performance among the employees ensuring long-run profitability and ensuring competitive advantage.

Setting up objectives is one of the crucial aspects of ensuring better performance as lack of proper goal or objective may lead drive towards wrong directions. It is noted from the case study that most of the employee were unskilled or semi-skilled therefore there was absence of cooperation and motivation. It is due to the autocratic of approach of the owner-manager that resulted in poor competitive advantage in the marketplace. Nonetheless, with the presence of new system poor performance cannot be handled leading to low profit margins. Employees were dissatisfied and de-motivated while they were placed in a team due to lack of knowledge and skills. Low-commitment was one of the elements that led to unsatisfactory performances. Contribution of the employees was minimal as a result of which desired result could not be achieved. On this note, performance objective in team and self-level should be set so that the next phases like monitoring and reviewing could be applied.

In the aforementioned section, team level goal and individual level goals are illustrated that would guide the employees in an enhanced way comparing to the old mechanism used in Steel Co. It should also be noted that identification of the measurable objective would provide the room to the employees to assess the gaps and fulfill those through proper action required. Notably, the organization has failed to ensure its profitability over the last few years due to presence of autocratic approach. The goal or the roles (responsibilities) of the employees were not explained vividly creating confusions and lack of commitment (De Waal, 2013).

However, being the business adviser, performance objective in both team level and self-level have designed complimenting the new PMS. In order to make the current system effective, performance objectives are set. Continuous monitoring of the performance is also recommended in this manner. Team-based working, bonus scheme and enhanced communication would also be introduced to strengthen the proposed mechanism. It was also seen that through the feedback forum the employees revealed their dissatisfaction regarding the amount that restrict them from being more focused. Now, if the performance objectives are set and the bonus scheme/reward scheme are announced it would ensure more transparency. Employees will be motivated as they are being informed already about the schemes. As a result, performance of the employees will get enhanced that ensure more profit for the firm.

3. Identification of barriers while implementation and ways to mitigate

Pollitt (2013) identified that any change may not be adopted easily without facing some barriers. In case of Steel Co, most of the employees are unskilled or little skilled that might be the biggest barrier to implement the proposed new system. Initially, it could also be seen that adopted changes missed commitment from employees’ end generating ineffective results. Lack of skill is the biggest barrier as employees may try to restrict the change and throughout the years, they have been working following same mechanism. However, the employees have ensured their participation in the change initiatives initiated by the manager but lacked commitment and motivation to work in a team and achieve the performance objectives. Some of the barriers could be outlined below to get a vivid idea:

Most importantly, the company has suffered loss (little or no profit) in the last few years therefore the amount of bonus scheme was low. From the feedback of the forum, it is identified that the amount was not sufficient. Now, due to financial draw back the company may not provide bigger amount that can be considered as another barrier to implement the proposed PMS. Now, the main concern is to find out the ways to mitigate the barriers. Ways to mitigate the barriers are explained below:

Formal meeting with the employees:

A formal meeting with the employees is recommended, as through this both the parties will get the chance to negotiate with each other (Teague et al. 2015). In the meeting session visual presentation, using graphs might be helpful where the graph would reflect the future direction of the company. Employees will get to know about the vision of the company. In addition, the roles and responsibilities of the employees should also be communicated and if there is any problem that can be solved. Efforts will also be made to convince the employees showing their personal and professional development.

This is one of the key techniques to solve the barrier, as both the parties will come to a shared approach. The chances of conflicts can be minimized along with better performance while working in a team.

Employees intend to restrict any change in organizations therefore while implementing the new mechanism; it can be asserted that the technique might be helpful to convince the employees to accept the change with open arms.

The study elucidates performance management system and its application while managing the employees and enhance their performance. Issues raised in Steel Co regarding performance are raised and a new system has been initiated from the point of view of the business adviser. From the findings, it can be asserted that the shortcomings faced by the management of Steel Co can be managed through the implementation of the proposed plan. In addition to that, recommendations made might be proven to be fruitful for the organization in long term ensuring its competiveness in the manufacturing industry along with long term sustainability.