Proposal On Perception And Attitude Of International Asian Students Towards Study In The U.K

With the increase in the trend of immigration quantity and quality, the Asian students are seen to be migrating from their birth land or continent of Asia towards European nations such as that of UK for doing higher studies in the best form and in the best quality and also in the best infrastructure of education which is ranked as one of the best reputed global or educational infrastructure of Europe. In this analysis the there has been provided a detailed discussion of the trend in the pattern of behaviors of internationally mobile Asian students towards the study curriculum and educational infrastructure of United Kingdom (Liu, 2013, p.77).

The aim of this proposal will be to analyze the behavioral pattern or attitude cum perception of Asian students who are desired to migrate to foreign nations in relationship with the study pattern or study curriculum of the universities of United Kingdom. The aim will be based on the course pattern taken by migrating students as it determines the migrating requirement of the students towards United Kingdom based universities. The aim will also be dependent on the course pattern or study curriculum based on various streams of study in the universities of United Kingdom as it is the factor which directly determines the attitudes of international Asian students towards their decision to go abroad for the sake of doing higher studies.

Background to the study

Among £10 billion students enrolled in the universities of United Kingdom, a huge portion of students coming to UK are immigrants. According to Davis et al. (2016, p.287), not only it has also been observed in the government based sample survey in United Kingdom that the trend of migrated students constituting the majority proportion of UK’s higher education population of pupils are maximum of native Asian origin. This is a positive indicator of growth of HDI of United Kingdom in terms of augmentation of human skills based on sharing of intelligentsia among students of Asian origin and European descent.

This aid them that is the students of United Kingdom a lot in terms of boosting up of knowledge based on UK pattern of universities which is directly enjoying the fruits of opportunities of getting huge number of talented Asian youth of both sexes participating in the regular courses of the curriculum of United Kingdom based industries and this participation rate is increasing in terms of boosting up of the rate of immigration and huge market demand of study based streams of UK oriented industries being generated by the talents and creams of Asian continent.

As cited by Setiawan (2015, p.47), another typical phenomenon based on the attitudinal pattern and perception pattern of Asian students migrating to UK based industries is that they are manly opting for higher level of courses like that of postgraduate and research oriented origin rather than joining in undergraduate courses. This phenomenon is based on the type or pattern of education based choices of migrating Asian students to UK and also dependent on the limited capacities of monetary resources of Asian student to make expenditures for studying and residing in United Kingdom in terms of betterment of their personal and professional lives based on academic or non-academic purposes. Taking into account the academic resources, it can be interpreted that Asian students mainly prefer to visit universities of UK for pursuing none other than higher studies in terms of achieving post-graduate and doctoral degrees which is strictly related with the optimum pattern of budgetary allocation resources of the students in monetary terms.

According to Gallagher-Brett (2016, p.66), another crucial point to be noted in terms of the above analysis that the migration creates an allover positive externality for UK by boosting of relationships between Asian countries and UK in terms of pacts and treaties of migration between the Asian and European continents respectively. It leads strengthening of socio -cultural relationships between the peoples of Asia and UK and aids in bolstering of economical infrastructure of United Kingdom.

The sampling procedure will be of Purposive sampling of non probabilistic origin based on choosing samples of UK based Asian students from the reputed universities.

The time required to complete this study will be obviously of long duration as it is a rigorous process of identification of samples of from universities of UK but approximately it will be of 7-8 weeks. 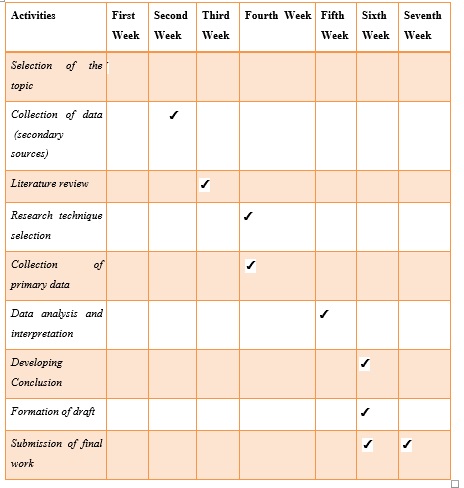 Research ethics will range from maintenance of time related processes in punctual pattern and also to conduct research analysis keeping into consideration the norms and rules of doing inter country research which should obviously abide by government rules and regulations of doing cross border based surveys. The ethics is typically based on the notion that the researcher will not use his well collected sample units of students for commercial purposes but will only use them in research. assignment writing service in Australia

Research outcome will depend on the findings of our research that whether the students of Asia does really have a knack of doing higher studies in UK and if so how far does the curriculum of study in UK based universities fits with their chosen streams of knowledge as per the analysis done in statistical and mathematical terms of our research. This outcome will be based on fulfillment of all the objectives of the research (Avakian, 2015, p.88). Besides that, the researcher will be able to point out prevailing issues as well as some better opportunities available in the same context.