Issues Surrounding The Health and Well-Being

In the present era, health related issues are increased among the individuals with a very high pace. Hence, changing living standard of people is one of the main reasons due to which individuals are facing health related issues. Along with this, with the aim to contribute the well being of individuals now UK government conducts several campaigns for developing awareness among them. In this regard, the present report will describe the extent to which young people of UK and Wales are facing issues in relation to obesity. Further, such report will also shed light on the role of health practitioners in reducing the health related problems.

Report presented by World Health Organization (WHO) entails that child obesity is one of main issues that are facing by the people of 21stCentury. Moreover, obese is associated with several health problems that highly influence the wellness of individuals. In order to provide information to individuals National child measurement programme has been organized by UK government. Hence, by measuring the height and weight of adults as well as young people it has been assessed that problem related to obese among the young people increasedby average 14% in each year. Along with this, report of University of London shows that approximately 56000 born in UK during the period of 1946-2001. Hence, problem of obesity is more common among such people in their earlier life (UK children becoming obese at younger ages, 2017). Besides this, ifproblem related to obese arise in childhood then it continues in the whole life. Further, obese adults also face issues in relation to the heart attacks and diabetes. 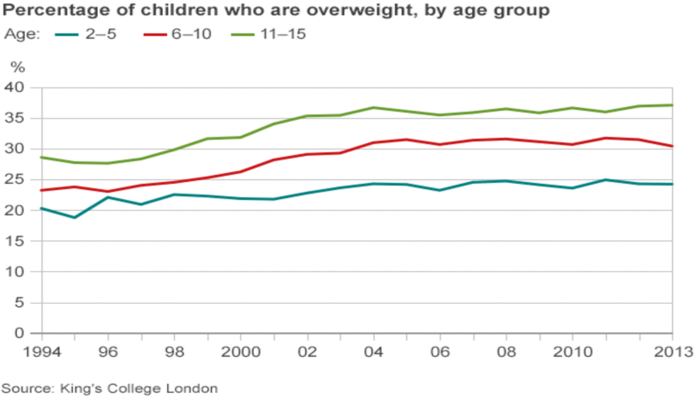 Figure 1: Percentage of children who are overweight, by age group

From the above mentioned graphical presentation, it has been assessed that problem of obesity was more common among the individuals in childhood.In addition to this, people who were born in 1980 were overweighed three times in comparison to the older generation. The rationale behind this, in 1980’s there were easy access for individuals in relation to taking high-calorie food. At that time, individuals and their parents were not highly conscious in relation to the health aspects. Due to this, problems related to heart disease and diabeteswas increased among UK people during such period (Reilly and Dorosty, 1999). The main reason behind this obesity accumulates the risk of heart problems and thereby creates problem in the daily life of individuals.

Along with this, from investigation, it has been found that children of obese parents were faced with more problems in relation to overweight. Hence, out of these almost two-third of adults was faced with the issue of obese. Due to the lathe body size and shape young people are facing physical and psychosocial problems (Reilly and et.al., 2005). Thus, problem of obesity is highly common among young people who are below the age of 18.Hence, by considering all such aspects it can be said that 28.1% adults of UK are suffered from the issue of obese whose body mass index is more than 30. From investigation, it also has been found that out of 10, 6 women are facing the problem of obesity. Further, two-third of men is also comes under the same category (Rennie and Jebb, 2005). By considering such trend it has been identified that in the upcoming year’s population of UK become obsessed. This in turn creates major challenges in front of government regarding the public health. 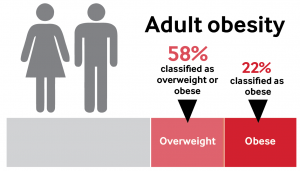 The above presented picture presents that in Wales of UK 22% of adults are recognized as obese. On the other aide, 59% of them are classified as obese and overweighed. Hence, in Wales obesity is one of the main aspects due to which death level increased with the very high rate. Along with this, due to the issue of obese adults and young people are facing problems in pertaining to live high quality life and earning aspects (Obesity in Wales, 2017). In this way, problem of obesity has high level of impact on health and well-being aspect of individuals (Armstrong and Reilly, 2002). Thus, in order to reduce such undesirable aspects Welsh government has taken several initiates. It has organized campaigns for generating awareness among the individuals about healthy eating and physical activity. However, irrespective of such great efforts obesity level in Wales not reduced to the large extent.

There are several issues which closely influence the health and well-being of children as well as adults to the large extent.Moreover, obese may sometimes cause mental health issues among the individuals. The reason behind this, in childhood and young age people have desire to look more attractive. Hence, in this regard obese is a main issue which closely affects the charismatic personality of individual (Reilly and et.al., 2003). In this, people feel highly depressed and prefer to live alone. Moreover, in both personal and professional life people give more preference to the individuals who look slim ad smart. 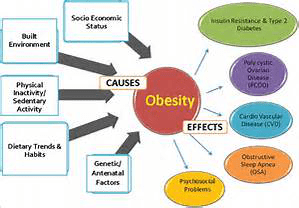 Along with this, sometimes due to large body shape and size young people are not in position to do each kind of work. In this, when individuals do not get employment opportunity in their desired field then it may results into greater dissatisfaction and low level of motivation among them.Thus, by considering such aspect it can be said that most of the time people feel depression when they do not get job in their desired area. Moreover, jobs and earning opportunities are influenced from both personality as well as knowledge level of people. For instance: In the hospitality industry, HR manager considers personality aspect of individuals at the time of making recruitment and selection. Hence, HR manager of Hilton considers body shape, size and weight while hiring personnel for front office department. In this regard, earning and career growth opportunities of individuals are affected from obese to the significant level.

Further, due to such obesity issue children and young people also avoids attending parties and cultural events or programs. In this way, young people who suffer from the problem of obese feel isolation to the great extent. By keeping all such aspects in mind it can be stated that obesity has high level of impact on the development and wee-being of individual (Ehtisham, Barrett and Shaw,2000). Moreover, depression restricts the mental growth and development of people to agreat level. Along with this, in schools and colleges other people also tease overweighed individuals which may also result into the high level of depression.

In addition to this, the another main issue behind the increasing level of obese among children, young and adults is mobile or smart phones. Now, individuals spend their huge amount of timeon playing games on mobile phones. In addition to this, now frequency in relation to making use of social networking sites among children who are below of 18 is increasing with the very high rate (Rudolf and et.al., 2001). All such activities closely influence the physical growth and development of individual. In the past years, involvement and interest levelof people in outdoor games was very high. Due to this, in previous times people were fit, fine and healthy. Moreover, outdoor games such as basketball etc are highly associated with the physical growth and development aspect of people. It helps young people in maintaining their body shape and size level. Hence, increasing trend of playing games on mobile phones have placed negative impact on the growth aspect of children.

In addition to this, previously children and young people were not highly conscious in relation to their health aspect. Along with this, they also prefer to take fast food on a regular basis which containshigh level of calories and fat. By doing research, it has been assessed that fast food and cold drinks are not good not good for health. Hence, during school life children do parties in fast food restaurants (Drake and et.al., 2002).Besides this, parents of such children also do not have proper idea regarding the food that is highly good for health. Hence, due to all such aspects obesity problem among UK and Wales people are increased with higher percentage. In this regard, by taking significant measure or action problem of obesity can be reduced in UK and Wales significantly. Measures which are related to it enumerated below:

Health care practitioner plays an important role in overcoming the issue of obesity which is suffered by young and adults. Moreover, health care personnel have ability in relation to preparing healthy food which contain more nutrition’s and low calories (Rennie and Jebb, 2005). Hence, by following the proper food chart children, adults and young people can make control on the weigh level. Besides this, by doing proper exercises according the guidelines of care professionals individuals suffer from obese can maintain good health.

Besides this, awareness among the parents are highly requitedto prevent the issue of obesity in early childhood. From assessment, it has been identified that pregnant women who suffers from diabetes needs to make focus on controlling such level. Moreover, if diabetes level is high during pregnancy then it places great impact on the obesity of baby (Emerson, 2005). In this way, by making control on such aspects obesity level children can be avoided in early stage. Along with this, by developing habit among the individuals related to eating healthy food parents can exert control on the obesity level of children. Further, physical activity is another essential main element and source of energy which makes children more active. Report of several research study shows that physical activities reduce the risk in relation to acceleration of weight gain. Moreover, such investigation report also shows that most active children have lower body mass index (Gill,1997). Thus, it is the responsibility of parents to develop and raise interest level of their children towards physical activities. Further, they also need to encourage their children to play outdoor games. In this way, activeness of children can be enhanced through the means of physical activity. In addition to this, parents need to make focus on providing knowledge to their children regarding healthy food. Hence, parents do not encourage child dieting with the aim to reduce theirobesity level (The Role of Parents in Preventing Childhood Obesity, 2017). Thus, by taking all such significant measures or actionsparents can make control on the overweight aspect of their children.

In addition to this, schools can also reduce the obesity of children by persuading them. Moreover, diabetes and heart diseases are common among the individuals when their body mass index is very high. Thus, by providing information to the students in the class awareness can be raised among individuals (Robinson, 1999). Besides this, teachers also need to place emphasis on providing information to the students regarding the food plan or chart which will prove to be more beneficial from health perspective.

UK government also needs to organize campaigns by appointing highly skilled and competent professionals. In this, by taking advicefrom experienced personnel individuals can share their issues. This in turn helps obsessed people inexerting control on weight. Moreover, healthy food plan and exercise are the main elements which makecontribution in the better health of individual.

From the above report, it has been concluded that due to changes take placein the cultural aspects issues of obesity are increased. Now, young individuals prefer to take fast food which in turn may cause of rise in obesity problem.Further, it can be revealed from the report that high use of smartphones other main reasons behind increasing trend of obesity. In addition to this, corporate field also gives priority to the personnel who are slim and smart. In this way, growth, development and well-being of individuals are highly affected from obese. It also has been articulated that people who suffer from overweight needs to follow healthy diet chart that is developed by health practitioners. Further, young people also needs to lay emphasis on doing exercises which in turn helps them in maintaining their body shape and level more effectively and efficiently.