Analytics is the vast field which is used by the firms to solve their problems. In the report, statistical tools like mean and mode etc are applied. Along with this, mean values are identified at confidence level of 95% for age and transactions. At end of the report, regression model is applied and its results are interpreted in systematic way.

1.) Descriptive statistics of the variables 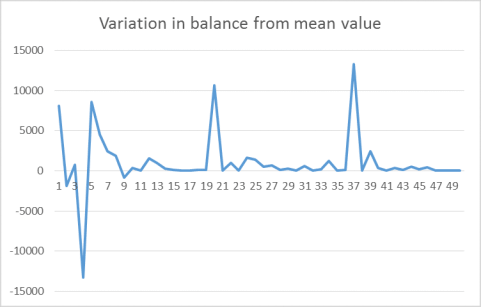 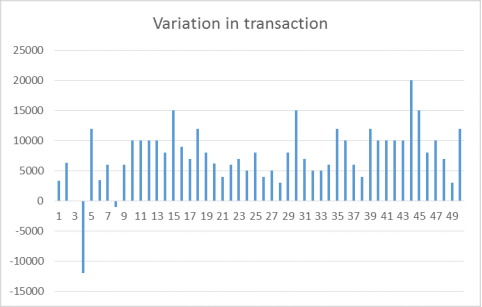 Figure 2 Chart on variation in transaction 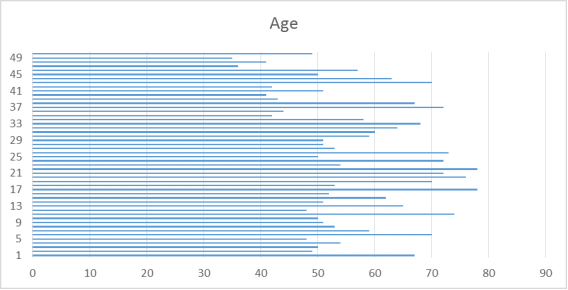 It is the one of the most important statistical tool that is used by the most data scientists (Weiss and Weiss, 2012). By making use of this tool average performance of the variable can be identified by the relevant person. In case of variable age mean value is 58 which means that on average basis individuals that have their accounts in bank are nearby to age of 58. On average basis these people keep a balance of 1532 in their bank account. Which means that most of people that are in sample have amount nearby to the 1532 in their bank account. It is also revealed from the data set that mean average transaction is 7487. Hence, it can be said that heavy amount of transition are done by the people from their bank account.

It is one of the most important statistical tool because it divide entire data in to multiple parts (Bickel and Lehmann, 2012). Thus, it helps on analyzing data in a systematic way. Median of age is 55 and it is value that portioned data in to two multiple parts. It is clear that average of age is 58 and comparison of mean and median of age reflect that there are number of people that have age above 55. Median value of balance is 275 and it can be seen from the data that its amount is fluctuating at rapid pace. Hence, it can be said that above and below median value balance amount is not moving in the specific direction. Median value of transaction is 8500 and mean of same is 8668. It can be said that above median value transaction amount does not increase at very fast pace.

It is a tool which reflect the value in the data set that is often repeating in same (Wall and Jenkins, 2012). Value of mode in case of age is 51 which means that in the sample there are many people that are in age of 51. Apart from this in case of balance value of mode is 47 which reflects that there are multiple people that have balance of mentioned value in their bank account. Transaction value (mode) is 10,000 which is above mean and median value of the same variable. This reflects that there are some people who are making big amount of transaction which is far away from mean value of mentioned variable.

Range reflect the difference between maximum and minimum value of the data set. In the case of age value of range is 19 and it indicate that there is big difference in the minimum and maximum age which is in the data set. For transaction value of range is 6000 which is high. It can be said that there are many people that are making huge amount of business transaction from their bank accounts.

Coefficient of variance is clearly reflecting the amount of risk that is on each unit of mean value of the variable (What is descriptive statistics, 2016). It can be seen from the table given in the appendix that COV is 0.18 which is low. On other hand, in case of variable transaction value of COV is 0.41 which is moderate. Hence, it can be said that with small change in the mean value of transaction moderate change will be observed in the standard deviation. For balance coefficient of variation is 1.99 or 2 which is high and it reflect that if mean balance will change standard deviation will change at rapid pace.

2.) Calculation of average age and transaction done by the business firms

Confidence intervals reflect the probability that values of the data set will lie in the specific range. Usually confidence interval is kept at 95% which means that researcher is 95% confident that values of the variable will remain in specific range. 5% indicate that there is mentioned percentage probability that values of the data set will be beyond specific range of data set. At 95% confidence interval mean value of age may lie in range of 55.88 to 60.86. On other hand, at 95% confidence interval mean value of transaction lies in range of 7822-9514. This means that there is high probability that age of the respondents will remain in limit set by the range given above. On other hand, there is high probability that people will make transaction in range of 7822-9514 if data will be collected in upcoming time period. On comparison of range with the relevant variables mean value it is identified that results will not change so much in upcoming months if assumption that 95% same trend will be observed in the data that will be collected in nearby months.

(a) Mean difference between females and male account balance

In the present research study hypothesis test was conducted in order to identify whether there is a significant difference in the mean values of the males and females. From table given in appendix it can be seen that value of level of significance is 0.14>0.05, t (2.11) which means that there is no significant difference between the mean values of the balance that is in account of males and females. This happened because male and female both do a job and there is a minor difference in their salary.

In the current research study hypothesis test is done under which it is identified whether there is significant difference between the mean values of the transactions that takes place through visa and non-visa cards. Results indicate that there is no significant difference in the transactions that are done from the visa and non-visa cards. Value of level of significance is 0.92>0.05 and same of t (2.01) and this proved the interpretation given above.

4.) Evaluation of linear relationship between transaction dollar and age

In this section hypothesis was prepared that there is no linear relationship between transaction values and age. In order to prove this hypothesis regression model is applied in the raw data. It can be seen from the table that value of R is 0.22 which means that there is very low relationship between the variables. On other hand, value of R square is 0.04 or 4% which means that due to change in independent variable only 4% change is taking place in the dependent variable. It can be said that age factor is not playing in role in determining the transaction that can be done by the specific age group people. Value of level of significance is 0.12>0.05 which reflects that there is no significant difference between the mean values of the dependent and independent variable. Degree of freedom is 1 which means that only one case in the data set is allowed to be altered in the data set. Value of coefficient for dependent variable is -69 which means that with elevation in age transaction reduced by -69 points which is very low and it again proved that age factor does not play any role in determination of amount of transaction that an individual can do from his bank account. Intercept revealed the expected mean value of the dependent variable. Model clearly reveal that expected value of transaction is 12,580. Hence, in upcoming time period it can be seen that on average basis people are doing a transaction nearby to 12,580 from their bank account. Hence, it can be said that in order to identify reason due to which one withdrawal are frequently observed in the people bank account there is need to identify any other variable.

On the basis of above discussion it is concluded that statistics is vast field and it help researchers in analyzing the data in better way. Business firms must like banks must analyze data time to time in order to make better business decisions. It is also concluded that male and female have bank balance nearby to each other. There is not a big difference in the amount of transaction that individual done from Visa and non-visa cards. It is also concluded that age factors also not affects amount of transaction done by the people from their bank account.

In the present research study data set that is related to bank is analyzed and lots of thing which are valuable are identified. The main findings of the research work are that male and female have nearby value of balance in their banks. Moreover, age does not play any role in determining the transaction value. People are making equal use of their visa and non-visa cards to do transactions. All these findings are prepared on the basis of detail analysis of the data set.