Blood in the body needs to flow continuously and smoothly throughout the body for an entire lifetime in order to keep the body fit and fine. Blood clots can help in preventing excessive blood from the body. But blood clots in critical areas such as brain or heart can give life threatening damage to body. To prevent blood clots, Warfarin has been prescribed by the doctor. It has some sort of side effects that can influence the body system. To prevent those side effects it has to keep in homeostatic range. Uncontrolled blood pressure, Stomach ulcers, gastritis, cancers are some effects which can be observed after Warfarin dosage.

Blood clots are health and lifesaving when they stop bleeding. But they can also form when they aren't needed and cause a heart attack, stroke, or other serious medical problems. To prevent blood clots in lethal areas, Warfarin has been prescribed by the health care professionals (Sekhri and et.al., 2016). The medicine possesses some side effects which can impact on body negatively. Warfarin is an antagonist for Vitamin K and can only be administered orally. It blocks the functions of vitamin K dependent clotting factors (II, VII, IX, X) (Leite, Martins and Castilho, 2016). The goal of warfarin therapy is to minimise the blood clots in critical areas. It is important to monitor the effect of warfarin carefully with blood testing. In order to maintain homeostasis, the endocrine system of body plays crucial role. As hormones regulate the activity of body cells, the endocrine system of body helps in maintaining homeostasis. The clotting Factors (II, VII, IX, X) has been identified due to Warfarin (Graham and et.al., 2015). The name of these factors are described below in the table: 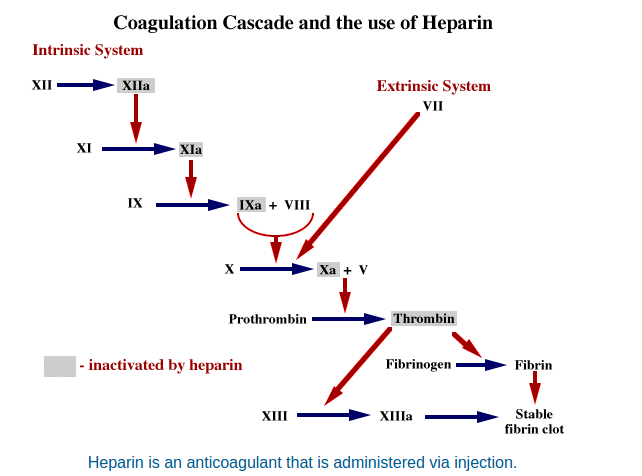 From the above image it can be understood that the suppression of the Factors II (Prothrombin), VII, IX and X have an effect on the establishment of a stable fibrin clot. There is direct effect of extrinsic pathway due to suppression of Factor VII (Siegmund and et.al., 2016). By suppressing the factor the whole pathway can be blocked. Intrinsic pathway can be affected due to inhibition of Factor IX and X. Factor X has a double effect on the extrinsic pathway because if there is still some factor VII in the blood stream it will have no factor X to react with. Thus, it is essential for the health care professionals to monitor the effect of warfarin in patient through blood testing effectively.