All living organism are made up of cells. It is known as biological unit. It is the smallest unit of life and can easily duplicate or replicate itself independently (Prescott, 2012). So cell biology is nothing but the study of cells. Cell contains cytoplasm that is encapsulated within a membrane. This membrane consist of large amount of biomolecules like protein and nucleic acid. There are two types of organism namely unicellular and multicellular. Unicellular organisms contains only one cell but multicellular contains large number of cells. The present report is based on the introduction to cell biology. In this project, similarities and differences between prokaryotic and eukaryotic cells are described . Additionally, the model of fluid mosaic is also explained.

1. Differences and similarities between prokaryotic and eukaryotic cells

The differences between prokaryotic and eukaryotic cells are following:

Some of the similarities between Prokaryotic and Eukaryotic cells are listed below:

a) Specialized structures of sperm

Sperm is a Greek word that has a meaning seed. It is a male reproductive cell. They cannot be divided and have a fixed time span. After the unification by the egg cells at the time of fertilization, a new organism get developed known as totipotent Zygote. The sperm cells of human are haploid because of that its 23 chromosomes can connect with other 23 chromosomes of female egg in order to form diploid cell (Kierszenbaum and Tres, 2015). In the mammals, these sperms are born in the testicles while emerges out from the penis. A mature human sperm consist of snake like structure. The various parts of sperm and its functioning are described below:

Head :Its shape is spherical having a large nucleus. This also has a dome shaped acrosome that is existing on the nucleus.

Neck:This consist of centrioles that are proximal centriole and distal centriole.

Middle piece: It is tube like structure in which mitochondria are present.

Tail: This is the last part that contains axial filaments. 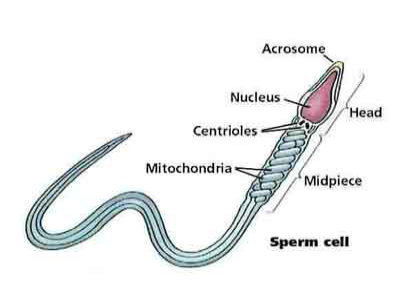 Red blood are also known as erythrocytes and these are present in large quantity in comparison to other cells like plasma, white blood cells and platelets. This contains a unique shape for performing their functioning. It has a flattened and biconcave disc shape. It do not contain any nuclei or mitochondria (Cheng, 2013). Their production occurs at the bone marrow and has a life time of minimum 120 days. Red blood cells are quilted or thicker at the edges while they are thinner at the centre. Its main function is to carry oxygen throughout the tissue from the lungs and then transporting back carbon dioxide from the cells to lungs.

Scientist use fluid mosaic model of cell membrane to describe about its functioning and parts. The cell membrane is made up of commonly three things that are Phospholipids, Cholesterol and Proteins. These are described below:

The purpose of cell membrane is to hold several parts of cell together and to protect it from the external environment of cell (Gilfillan, Austin and Metcalfe, 2011). It also take care of regulation and do not loose large number of nutrients and takes too many ions effectively. This also do the job of protecting from harmful things.

3. What forms of transport occur, and how are they important?

Active and passive transport are two biological process that are responsible of moving oxygen, water supply and nutritive particles into cell membrane and also assist in removing waste matters from it. Active one needs chemical energy as it allows movement of biochemicals from the areas of low concentration to the higher one (Strickland and et. al., 2012). While passive transport do the opposite work by moving biochemicals from high concentrated region to lower one. So, it does not need any energy. Active and passive transport is very important as it controls the entry and exits of different materials. This transport of material is to and fro and are dominated by the permeable cell membrane.

4. Discuss how mitosis and meiosis occur while explaining how they are different

Mitosis can be defined as cycle through which eukaryotic cells under go. During this process, the cell is duplicating its DNA and are separating it into genetically similar cells. The stages of Mitosis are described below:

Meiosis:This is a special cell separation cycle that is used to divide gamete or sex cells. The stages of meiosis are following:

The main difference between meiosis and mitosis is that mitosis are occurring in every eukaryotic cells (Davis and Chin, 2012). On the contrary, meiosis is a exceptional type of mitosis that are occurring only in gamete or sex cells. Mitosis are creating two same cells from single mother cells while meiosis are generating four genetically specific haploid cells from one mother cell.

From the above based report it has been concluded that the cell biology has covered a vast range of processes. There are two types of cells namely eukaryotic cells and prokaryotic cells. The structure and role of human sperm is described here. Additionally the structure and functioning of red blood cell is also highlighted. The fluid mosaic model are explained with three parts of cell membrane that are Phospholipids, Cholesterol and Proteins.