The genuine term hydro-static is used which means the transfer of different form of energy from pressure and flow, excluding the kinetic energy. The hydraulic system is mainly having three parts; first one is the generator that is a hydraulic pump (Smettem and et.al., 2016). Second part is the electric motor, which will drive the generator. Third part is the combustion engine, which will be used to run the machinery. All the hydraulic system's are based on the Pascal's law.

The pascal's law can be stated that, “As the system pressure is same, the force which is given by the fluid to the surroundings will be equal to the product of pressure and area (pressure * area). Therefore, a piston with small diameter will feel small force and the large piston will be facing with the large force. Most of the hydraulic system will be having the hydraulic cylinder, which will be coming in use (Lee and et.al., 2014). The same principle is used here, like very small torque is inherited into very large force. If anyone want to change the transmission ratio, then by the throttling the fluid in between the part of the generator and motor part or by the use of different motors which will be having swept volume that can be adjusted, it can be done. The major advantage of such hydraulic system is the high power density. The total mass of the hydraulic system is many times smaller than the electric drive mass, which will be producing same power.

These hydraulic drives are mainly divided into three grades;

This classification is done, because all the components are divided into three categories. But sometimes there can be a overlap between the mobile and industrial hydraulics. Air craft hydraulics elements are very specific and specialized (Chen and et.al., 2014). This is due to their extreme requirement of weight and accuracy. In developing the hydraulic system which is a complex one, then it is mandatory that they must have suitable and accurate advancement- methodology. This accurate methodology is used to reach the results which are necessary in short and quick time duration.

Applications of the hydraulic system are as follows;

The following objectives are covered in this report;

By the use of performance electronics and various software, these hydraulic systems are becoming more and more intelligent and advanced. The development of such new technologies and the use of advanced software, all these complex systems are transforming and changing, so that it will be very easy to use (Yao, Jiao and Ma, 2014). There will be further improvement in the technology. The high performance sensors will be very helpful in the self-monitoring of the systems. The maintenance will not be on the frequent basis because the equipment's are very long lasting and the maintenance will be dynamically. The hydraulic system will have some benefits and advantages which will make it more efficient in power transmission, they are;

Despite having all the highly desirable features, this system is having some negative impacts as well. They are;

This report consists of 5 different chapters, which will cover up the entire development of the entire algorithm process and its use in hydraulic systems.

Hydraulics system is a function of mechanical engineering, which uses the force of liquid pressure to operate. In such type of systems, the movement of the components is produced with the help of contained liquid, which will be passing through the cylinders moving piston. The hydraulic system is the combination of mechanical, electronics and the software engineering, also known as mechatronics. This is used in designing and manufacturing of various parts or products. Some basic hydraulic system uses only water as a fluid medium. They uses the force of gravity to create the pressure of water (Wang, T. and Wang, Q., 2014). Some of the more complex systems uses the pumps in which the piston is moving inside a cylinder, so that the oil gets pressurized. The valves are there, to control the flow of liquid.

Hydraulic pump: The pump uses the form of mechanical energy and converts it into hydraulic energy. The change in the form of energy is done by the movement of fluid, which is used as the medium of transmission. The hydraulic pumps may have gear pump, vane pump and also the piston. All such kind of pumps will have their specific application like variable displacement pump, bent-axis piston pump etc. The main function of all these pumps are same, which is the displacement of the fluid against friction and pressure.

Valves: Hydraulic valves are used to start or stop the system. These can also be used to direct the flow of fluid. These valves are having spools and poppets. All these can be actuated by the means of pneumatically, electrically, hydraulically or mechanically.

Open center support: The fluid will keep on flowing in the whole system, unless the actuator remain idle. The idle system means that no pressure is applied. The fluid will flow from the reservoir, through the pump and the valves and again back to the reservoir. The valve position is the main thing to build up the pressure in the system (Casoli and et.al., 2015). The valves remain in neutral position, if the actuator is idle. The actuator is changing its position, means if it is up, all the valves are out of their neutral position. The pump will start to bear the load. The volume remains constant and there is no pressure regulator in open system. 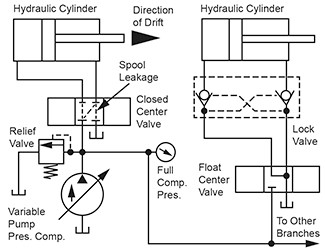 Closed center support: in such system, the fluid is always under certain pressure. The pump is operating and releasing and when a certain value is reached by the pressure regulator. The selector all are always in parallel system, not in series like in the open system. 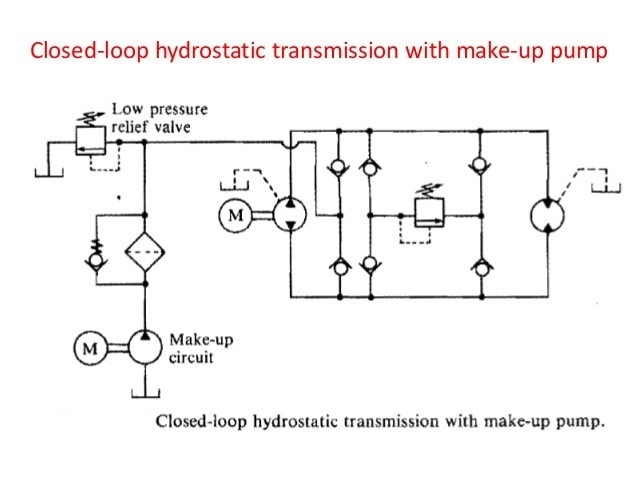 Combination support system: This system is having the functions of open as well as the closed center system. In such systems, the hydraulic capacity is served by closed system and the auxiliary applications are handled by open system. The performance will always remain high, even in the cold conditions. This system is having more number of parts, means the requirement of different subsystems. 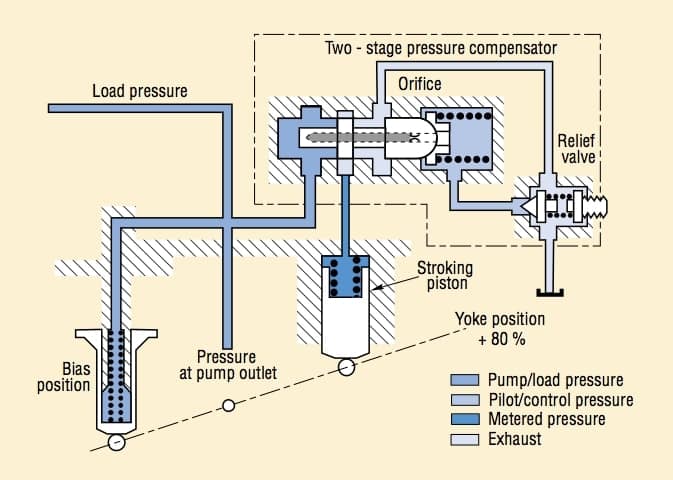 But such system are having some disadvantages as well;

Gear pump: Different machines and all the combustion engines needed the correct amount of the lube oil, so that they can run very smoothly. Different machines are having thousands of gears which need to be lubricated and the gear pump does exactly the same (Mahdi, 2017). These pumps are now used as the system of lubrication, which supplies the gear with the required amount of lubricants. These pumps makes sure that the lubricant reaches to all the components. The hydraulic steering system is using gear pumps to move the fluid. 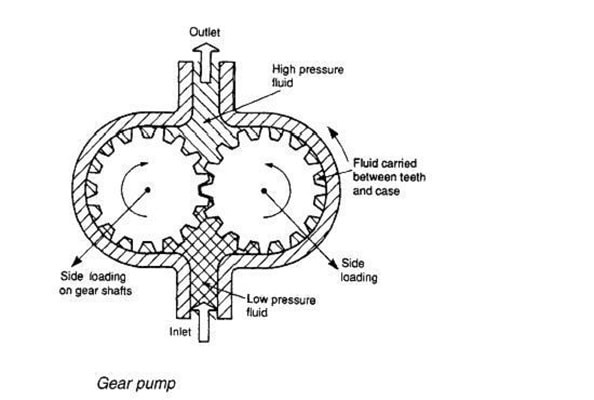 Vane pumps: These pumps are used in the die-casting or different molding machinery. The flow pulsation is comparatively low in these pumps. The flow is always constant in these pumps, so the noise produced is also low, even if the speed of the machine is high. The operating pressure of these pumps will not cross over 175 bars. But some of the vane pumps are designed in such a way that they can operate on 300 bars also. These pumps are important in the construction of land and road machinery. 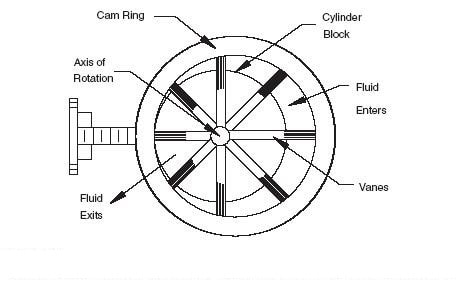 Axial and radial piston pumps: The axial pumps will operate in both open and closed circuits. Thus, it will be having variable setting of speed or it can be fixed. The change in the direction of fluid can be done and the operation is also very simple (Vaezi and Izadian, 2015). But if the system is containing high pressure which is around 400-700 bars, then radial piston pumps are very useful. The piston inside the pump will extend in the radial direction and this will be around the drive shaft. These pumps are generally very efficient and produce very less noise. 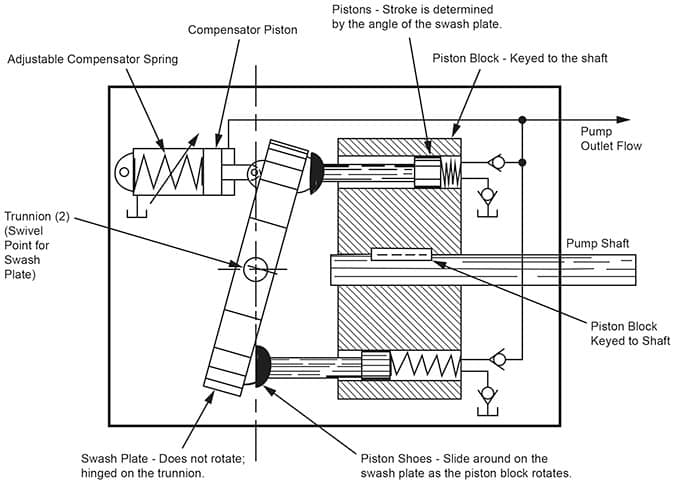 The hydraulic systems are generally used in industrial plant and the environment. And apart from this, the marine industry is highly using the hydraulic system (Reed and Löfstrand, 2015). There are hundreds of applications are there which are having such systems, and some of them are;

The algorithm or the analysis is very essential in the designing of the hydraulic system and the transmission of various machinery; like machine cutting tools; self propelled chassis etc. This is done ti simulate long before the beginning of production model and its related working processes, so that we came to know about the weak places in the hydraulic system. This mathematical system will be consisting of different technical system which are also of different class like electric, electric, hydraulic etc.

For the build up of this dynamic model of the hydraulic system, the latest and most advanced method of finite element-node structure is used. This whole new system will be divided conditionally and according to that all the components are divided in the form of input and output. To design any hydraulic system, the major component of the system can be: hydraulic motors, pumps, hydraulic cylinders, different valves, load resistance which is the throttle, pipelines, the pneumatic or spring accumulator, pilot operated check valve, power regulator, wheel carrier and directional control valve. After knowing all the elements and components used in the hydraulic system, the simulation is done, but there are certain things which are necessary while doing this dynamic process. They are;

The algorithm of the hydraulic circuits, the hydraulic elements and their base, arranging the data and the preparation of algorithm, automatic system, which will describe the solving process of algorithm, the methods which will be used in solving those problems, the dynamic calculation of any hydraulic circuit and lastly the way of presentation. The analysis of various hydraulic system, which are applied in various hydraulic machines clearly shows that, the set of hydraulic machine is very finite and some very essential elements are there by the means of which, to analyze the circuit of any hydraulic drive is possible. The calculation and making of algorithm is decided by the application of variable pressure, the speed, different flows and position of parts, which are placed in the hydraulic circuit. These node can be used in one another, like one same node can be an output of one element and the input to another element.

Any hydraulic circuit will have some predefined set of elements which will be helpful in making the circuit and the nodes which are the point of connections of each elements. Each hydraulic circuit can be presented in three nodes, except directional control valve. The nodes will be I (input), J (output), K (transformation of energy control).